The month of May brought more than spring May flowers! In honor of Mother’s Day, Tacony Lodge No. 600 held its first ever Mother’s Day Tea Party. Though small in number, the attendees had a great time!

Our Stated Meeting was our Junior Warden’s Night, where Bro. Richard Schoeniger, JW took the East and did so with confidence! The lodge will be in great hands when he gets to the East. His program was an actor who portrayed Bro. Benjamin Franklin from the time he arrived until the time he departed! The brethren had a great time listening and conversing with Bro. Ben, and the laughter could probably be heard a cabletow’s length from the lodge!

During the meeting, the lodge was honored with a Visitation by Bro. Leonard A. Juliani, Jr., DDGM Masonic District D. Brother Juliani presented Bro. Efrain Rivera, SW, with the Master Craftsman Award! 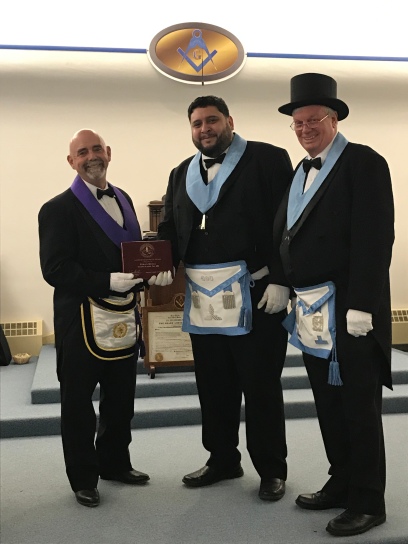 At our Extra Meeting, we passed two brothers to the Fellowcraft degree and initiated one candidate into the fraternity. Our lodge continues to grow!

View all posts by tacony600